I’ve posted some pictures of our floor plans and elevations before, but it can be hard to get a handle on what’s what with all of the construction pictures so a detailed walk-through is in order. Ours is a two story modern house with three bedrooms, including the master upstairs with living spaces and a multipurpose guest room/office downstairs.

Instead of starting with the first floor, I’m going to first show you the site plan. It’s important to begin there because architecture should be site-specific. In fact, one of the reasons we chose the architect we did is because he chose to meet us on the site first instead of simply meeting at his office.

As you can see our lot is long and narrow, just over one acre. We placed the house on the back third of the lot to have a nice set-back from the road and room to play in both the front and back yards. You can see that there’s a spot for a future pool and shop. Those were cut because of budget. Next spring, we’ll put in a good size garden.

The primary space outside is the courtyard. It’s walled-in on two sides by a cast concrete wall and partially covered by a 2nd floor tiger wood deck. The deck above provides waterproof shelter for some generous outdoor space to use on rainy days.

It was important for us to have the kitchen, dining, and living rooms one continuous space. We originally planned to have a storage wall of cabinets at one end of the dining room. 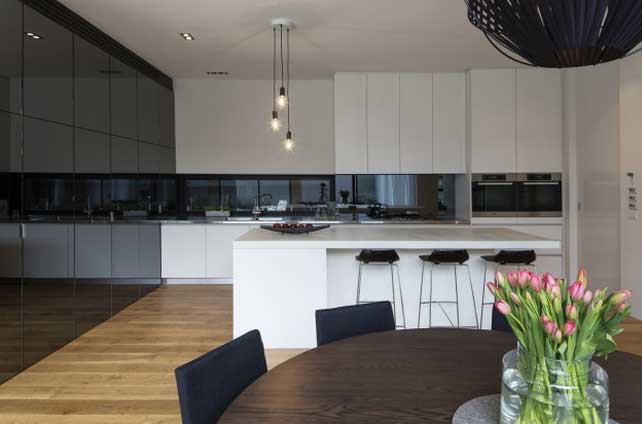 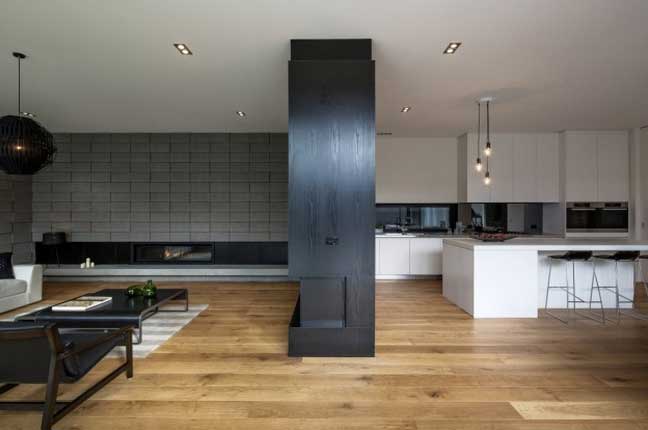 The loss of the storage wall has us concerned about cabinet space. We decided to just try to make efficient use of the cabinets we have. Sometimes having constraints like that can force you into a better state of being more efficient.

In the guest room/office is a flexible space that in addition to rooming guests and pulling office duties will be a play room which means a place to dump the toys so they’re out of sight. To maximize the space, we plan on putting in a murphy bed. To keep it open, there’s a pair of pocket doors. The hall way in front of this room may look odd, but it’s there because we have plans for a home theater that the hall will eventually lead to.

We have a generous amount of glazing on the south wall. This is to maximize not just natural light, but solar gain in the winter. Because the sun is lower on the horizon in the winter months, it will shine through the windows heating the air and the concrete slab inside the house giving us free heat. This passive solar design works well for us due to the shape and orientation of the lot. The possibility of using passive solar was one of the things that attracted me to the property initially. To keep things cooler in the summer, when the sun is higher in the sky, overhangs shade the windows.

The utility room is another flexible space. You pass through it when entering the house from the garage so it functions as a mud room, a place to drop dirty shoes with a sink to wash up. We have a table in the middle as a space where we can do craft projects and be messy leaving the mess there instead of using a place like the dining table where we’d have to get things out, put them away, and clean up.

The three car garage is something I’m particularly excited about. This means my poor neglected RX-7 won’t be left outside and I’ll have ample space to work on it.

Upstairs we have all of the private spaces, so all bedrooms and a small sitting area at the top of the stairs. We’ll probably put a coffee table and one of our couches up there and maybe a TV for the kids. We originally considered a glass railing around the space that’s open to the first floor, but we had to cut that in favor of a pony wall finished in sheetrock to save cost. The sitting area divides the master suite from the children’s rooms.

You can see we have a generous master bath and closet. We kept the master bath nice and open with a glass partition for the shower in lieu of a shower door. We also elevated the tub and shower area from the rest of the space to give some delineation of the space without building walls. The master bath flows directly into the master closet, and important feature for us because I wake up before my wife and need to get ready for work without disturbing her.

In the closet, we have space for an island counter that pulls storage and ironing board duty.

We were sure to include windows in the closet and bathroom to let natural light in. This is something friends have recommended.

Growing up I never understood how my parents could allow the injustice of me always having a smaller room than my older sister. The kid’s rooms are mirror images of each other, exactly the same size so there will be no complaining of the sort from our children. Their rooms share a “jack and jill” bathroom. We were sure to separate the tub and toilet from the sink and mirror with a door so one can carry on washing or going activities while the other takes care of tooth-brushing and primping at the same time.

The two rooms cantilever four feet into the courtyard providing shade for the expanse of glass in the living and dining rooms below.

The outdoor areas are what make this house for us. Having usable outdoor space with a second-floor deck were high on our list of priorities when we started the design process with our architect. When the weather is nice, we plan on living in the whole space, as if it were a single room. When the weather is wet, we can still use the space under the deck to be outside. In the evenings we can relax on the deck taking in the sun as it sets behind the cow pasture (however long the cow pasture resists the sprawl of development).

Under the deck is all concrete and an apron of concrete extends past the house eventually dying into the ground. Filling in this space that makes up most of courtyard was originally going to be grid-crete, but it was cut to save cost. It will be easy to add it in later. The grid-crete will give us a more solid surface while still being green and providing drainage.

So that’s our modern abode to be, under construction as I write. Check back, or better yet, subscribe to keep up with the progress.

Happy Independence Day! This week the builder and I completed the electrical walk-through downstairs which consisted of determining the…

This morning I took some breakfast to the guys hard at work framing the house.  My wife baked up…